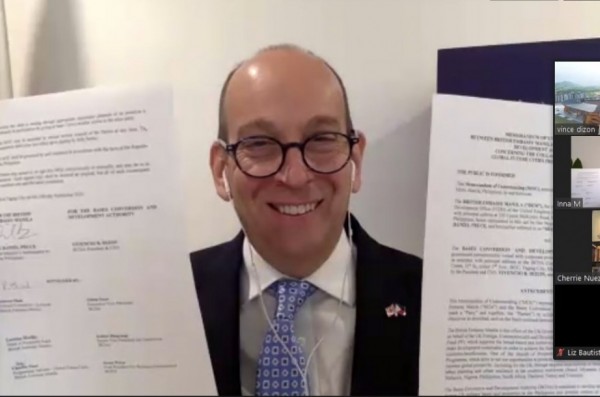 The British Embassy Manila and the Bases Conversion and Development Authority (BCDA) have signed a memorandum of understanding (MOU) to design the New Clark City Central Park and an affordable housing project in the new metropolis.

The MOU was signed by British Ambassador to the Philippines Daniel Pruce and BCDA President and CEO Vince Dizon during a virtual ceremony on Wednesday, September 16.

“What is being done in Clark is pioneering and hopefully creating a model for developments elsewhere in the Philippines and the region,” said Pruce.

“It’s exciting that we face the prospects of something which is going to be clean, green, sustainable and resilient and a city that’s inclusive as well where all branches of the community and society can find their place,” he added.

New Clark City, envisioned as the first smart, green, sustainable and resilient metropolis in the country, was chosen as one of the pilot areas of the UK Prosperity Fund Global Future Cities Programme.

Phase 1A of the New Clark City project, which involved the construction of world-class sports facilities used in the 30th South East Asian Games (SEA Games), government buildings and residences, and a 1.4-kilometer river park, was completed last year.

“We’re very, very thankful to the British government for staying the course and really believing in New Clark City and believing in the leadership of President [Rodrigo] Duterte who actually got such an ambitious project off the ground and starting it and moving it into the future,” Dizon said.

“I don’t think we would have found a better partner to develop the green and open spaces than the United Kingdom,” he added.

Through the Future Cities programme, the UK and BCDA will come up with a conceptual and detailed design for the Central Park, which will also be integrated to the open space network of New Clark City and its immediate surroundings.

The parties will also design a pilot 33.89-hectare affordable housing project in New Clark City, and will review the existing housing strategy within the CSEFZ and New Clark City.

Under the MOU, the parties will also set up a sustainability unit for New Clark City and facilitate development of activities on urban planning, disaster resilience, urban design, landscape architecture, and sustainable development goals.