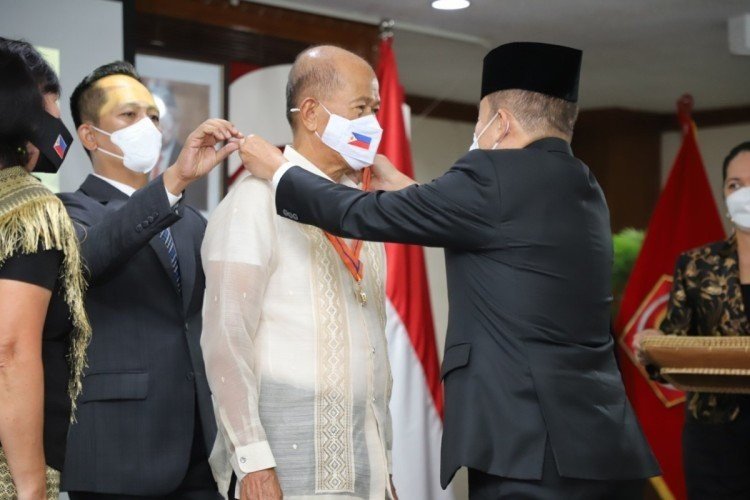 Bases Conversion and Development Authority (BCDA) Chairman Delfin N. Lorenzana and retired Armed Forces of the Philippines (AFP) Chief-of-Staff General Cirilito E. Sobejana were the first Filipino recipients of “Medal Perdamaian” or the Medal of Peace from the government of the Republic of Indonesia. The award was presented by Indonesian Ambassador to the Philippines Agus Widjojo in a ceremony held on Wednesday, 03 August 2022.

Fifty Filipino soldiers of the AFP were also awarded the Medal of Dharma Defense.

These recognitions were given for leading vital roles in the successful rescue of two Indonesian nationals on December 22, 2019 and another citizen on January 15, 2020. The three rescued Indonesian fisherfolks were abducted by the Abu Sayyaf Group on September 23, 2019.

"We are gathered here this afternoon to give honor to these men who painstakingly adhere to the call of duty even if it meant putting their own lives at risk. It is their sense of commitment to uphold the righteous and condemn the lawlessness that made Indonesia decide to grant them two of Indonesia's token of honor, the Medal of Peace and the Medal of Dharma Defense,” said Ambassador Widjojo, who conferred the medals on behalf of Indonesian President Joko Widodo.

He commended Chairman Lorenzana, who previously served as the Secretary of National Defense during the administration of President Rodrigo Duterte, for leading and supervising the AFP in its rescue missions.

In his acceptance speech, Chairman Lorenzana shared the award with the Indonesian, Malaysian and Filipino men and women who "worked tirelessly to safeguard our common borders." He also noted that the Duterte administration finished its term without any hostages held by the Abu Sayyaf.

Chairman Lorenzana was accompanied by his wife Edith and children Cecille and Erik.