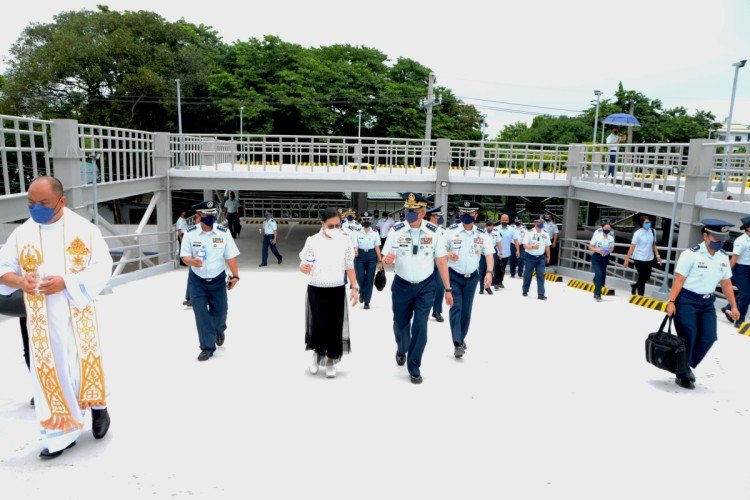 The Bases Conversion and Development Authority (BCDA) has completed a Php 72-million parking structure for the improvement of Philippine Air Force (PAF) facilities inside Villamor Air Base, Pasay City, as part of the state firm’s replication program for the Armed Forces of the Philippines (AFP).

LtGen Connor Anthony D. Canlas Sr, commanding general of the Philippine Air Force, expressed thanks to BCDA for facilitating the funding and construction of the parking facility. He noted that it provides a timely boost in the development of air base facilities for the PAF, which marked its 75th anniversary on July 1.

"I know that these are difficult times with soaring oil prices and very limited budget. But through your ingenuity, the completion of these projects was made possible," Canlas said during the recent blessing and inauguration ceremony of new PAF facilities, which includes the parking building.

LtGen Canlas added, "The PAF under my leadership … is committed to provide our personnel with the best facilities in order to successfully perform our mission. The completion of these facilities is a step towards being adaptable to the requirements of our core systems to optimize our air bases' capacity."

Hedda Rulona, officer-in-charge of BCDA's Investment and Financial Management Group, who spoke on behalf of BCDA OIC President and Chief Executive Officer Atty. Aristotle B. Batuhan, said that the opportunity to keep building for the PAF is "exciting" for the state firm "as it supports our shared vision of continued modernization."

"We trust that this BCDA-funded parking facility will not just increase the Air Force's capacity to accommodate vehicles, but boost its operational capability towards defending the Filipino nation and responding to crises and disasters. I personally derive inspiration from engagements with BCDA’s biggest stakeholder, the AFP. It fuels the drive to keep building better and modernizing even more, contributing funding that will enable the purchase of air assets that will catapult our Air Force to be the best in the Southeast Asian region," Rulona said.

Rulona added, "Now that this parking facility is complete, we would like to assure all of you that in spite of the challenges, the BCDA remains steadfast in its commitment to strengthen and modernize the Armed Forces of the Philippines, including the Philippine Air Force."

For his part, Col Antonio Z. Francisco Jr, Acting Commander of the PAF Air Installation and Base Development Command (AIBDC) tasked to manage and maintain the facilities, highlighted the successful partnerships which have put airmen in a better position to serve and defend the Filipino nation.

Col Francisco said that the blessing and inauguration of new facilities was “another milestone in the effort of the Philippine Air Force to provide quality infrastructures for the improvement of its services. This activity is quite special because it is a celebration of the embodiment of what stakeholder engagement should mean … These projects highlight the Philippine Air Force’s resolve to serve its airmen and fellowmen by providing services that improve working conditions.”

In line with its mandate to strengthen the military under Republic Act 7227, BCDA has contributed a total of Php 56.4 billion to the Armed Forces of the Philippines.

This year, BCDA remitted Php 6.31 billion in AFP shares to the Bureau of the Treasury. This marked a 138-percent increase compared to the Php 2.64 billion in 2021.

Through its replication program for the military, the BCDA has built facilities for the Philippine Air Force in Villamor Air Base and other camps amounting to Php 896.44 million.

The replication of more Air Force structures are in BCDA’s pipeline, including PAF facilities and utilities which occupy 313.4 hectares in the Clark Freeport Zone in Pampanga. This involves the Php 3-billion relocation of PAF community and housing facilities to a 65-hectare area in New Clark City, Tarlac.

PAF operational facilities at the Freeport, meanwhile, will be relocated to a 146.88-hectare site within the OMNI Aviation area, which is also in Clark. The preparation of the designs is ongoing.