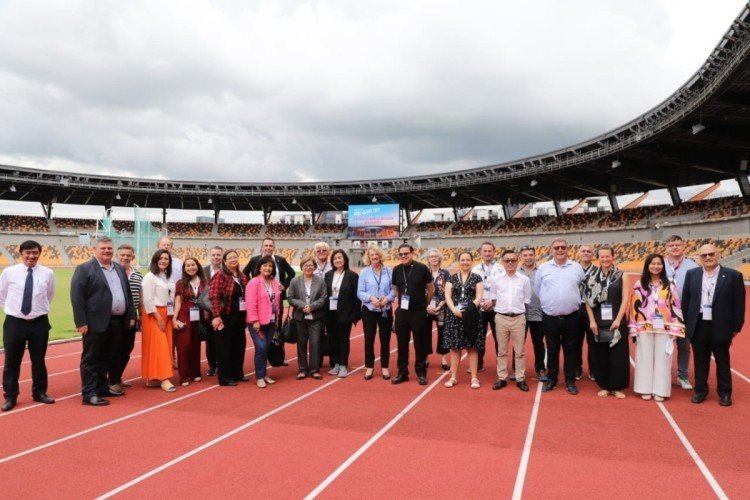 One of the investment destinations highlighted in this year’s Pacific Business Mission is the New Clark City, a carefully master-planned metropolis in Capas, Tarlac being developed to help decongest Metro Manila and catalyze growth in Central Luzon, and eventually across the country.

Positioning a positive trade outlook is former President and Pampanga 2nd District Representative Gloria Macapagal-Arroyo. “My wish is to have closer ties with our southernmost neighbors, Australia and New Zealand. I hope our Australian and New Zealand guests will set business in the Subic-Clark corridor and neighboring sites,” Rep. Arroyo said in a recorded message.

Delegates of the Pacific Business Mission toured around the world-class facilities in New Clark City, such as the National Government Administrative Center, Aquatics Center, and Athletics Stadium. Speaking at the business mission, BCDA President and CEO Aileen R. Zosa urged more than 50 potential locators to consider New Clark City as their future home and growth hub in the Philippines.

“Our jewel is Clark. We envision New Clark City to be the first smart, green, and resilient metropolis in the Philippines. The thrust of New Clark City is sustainability. It is created not just for investors, but also for the surrounding communities,” said Ms. Zosa.

During her presentation, Ms. Zosa highlighted the sustainability features of the 9,450-hectare New Clark City, of which 70% is being preserved for green and eco-tourism ventures, while the remaining 30% is buildable. The new BCDA PCEO also presented plans of developing an affordable housing complex and the Philippines’ largest public park within the metropolis, which will emphasize non-motorized and sustainable transport-oriented development (TOD).

To create a community for all regardless of background and income, Ms. Zosa said that a 34.55-hectare affordable, multi-tenure and climate-resilient housing project will soon rise in the metropolis, which will feature a river park, town center, community square, sports park, pocket parks as well as mixed-use residential and commercial developments. All of these will be connected to bus rapid transit and metro rail transit systems, among others.

Ms. Zosa also discussed other projects in the pipeline, such as a world-class city management and administration services, a data center colocation facility, and a solid waste management and waste-to-energy project for New Clark City.

“New Clark City lives on its vision and its mantra of really being a city of the future. I’m very glad that this 50-member business delegation is actually interested in sectors that have direct impact on particular matters, such as environment protection, digital transformation, and physical connectivity,” said Philippine Ambassador to Australia Ma. Hellen B. De La Vega.

The Pacific Business Mission is jointly organized by the Philippine Trade and Center in Sydney, the Philippine Board of Investments, Export Marketing Bureau, Philippine Economic Zone Authority (PEZA), the Subic Clark and Alliance for Development Council (SCADC), and the freeport and economic zones in the Subic-Clark-Bataan Corridor.