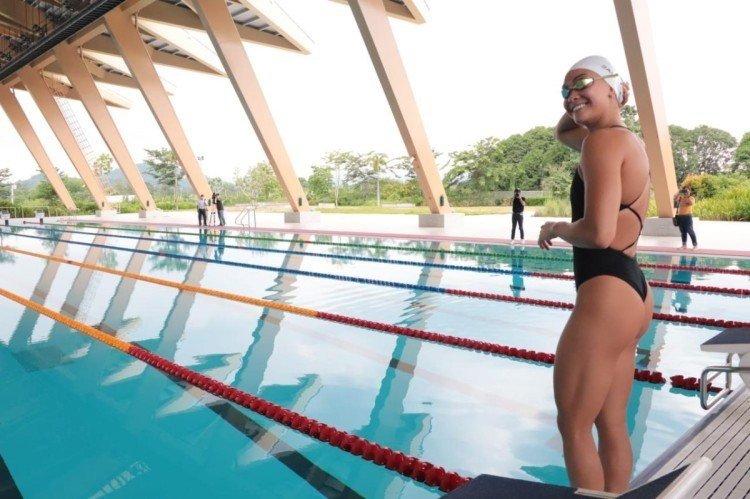 Impressed with its facilities and amenities, two-time Tokyo 2020 Olympic Games Medalist Kayla Sanchez has expressed interest in training at the New Clark City Aquatics Center in Tarlac, as she hopes to represent the Philippines at the Paris Olympics in 2024.

“It has the best facilities I have ever seen. It’s breathtaking. The view and the location - I have no words. When you’re actually in the facility itself, it just has everything you need. I am so excited to be able to train here,” 21-year-old Sanchez said after testing the waters of the New Clark City Aquatics Center.

Raised in Canada and born in Singapore to Filipino parents, Sanchez is eyed as the Philippines’ best hope to end a 90-year medal drought in Olympic swimming as she targets to compete for the Philippines at the Paris Olympics in 2024.

The double Tokyo Olympics medalist, together with around 30 invited young Filipino swimmers from the Philippine Swimming Incorporated (PSI) on Saturday, July 9, trained and had a friendly relay at the New Clark City Aquatics Center. Some of its features are a whole-body air dryer, the Swiss Timing sports equipment, year-round water temperature of 26 degrees Celsius, and its accessibility to the 525-unit Athletes’ Village.

“May this serve as affirmation for Kayla and to the young Filipino swimmers who are with us today that there is promise for the Philippines and its athletes here to train, compete and succeed at the highest level,” said Bases Conversion and Development Authority (BCDA) Senior Vice President for Corporate Services Group Arrey A. Perez.

New Clark City was the main venue of the 2019 Southeast Asian (SEA) Games, where the athletics and aquatic events were held. Nineteen SEA Games records were broken in the competition pool during the 30th SEA Games. In December 2020, the New Clark City was cited as the 2019 Sports Tourism Venue of the Year at the 4th Philippine Sports Tourism Awards.

“With the arrival of Kayla to the team, PSI seeks to ensure that she will be equipped to achieve her goals in the same way that PSI does for its current roster of athletes. This includes training in world class facilities like the New Clark City. So we are happy to be here today to present to you Kayla, but also to show to her the world-class facilities here in New Clark City,” said PSI President Lani Velasco.

The New Clark City Aquatics Center is the only Fédération Internationale de Natation (FINA)-approved swimming facility in the Philippines. With a total seating capacity of 2,000, it features a 10-lane competition pool, eight-lane training pool and a diving pool.

The competition pool, the training pool, and the diving well were designed and installed by Myrtha Pools –– an official FINA partner and leading builder of made-to-measure competition pools. The New Clark City Aquatics Center is part of the National Government Administrative Center Phase 1 project.