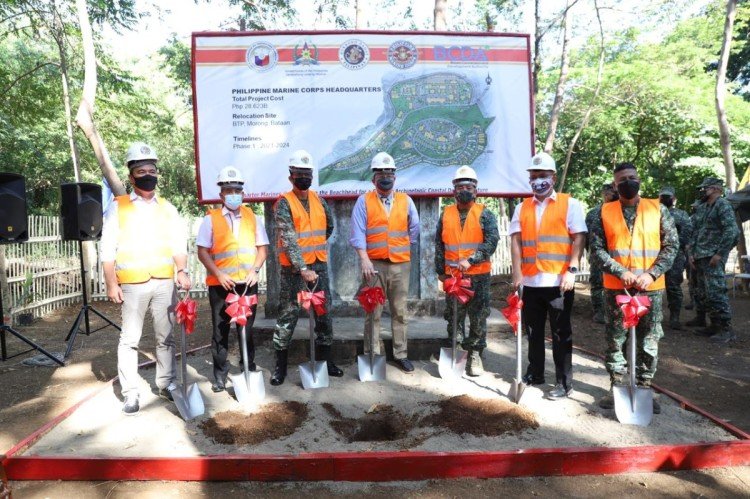 The Bases Conversion and Development Authority (BCDA) is set to commence construction of the Philippine Marine Corps’ (PMC) headquarters and operational facilities at a 100-hectare lot in the BCDA-administered Bataan Technology Park (BTP) in Morong town, with the Php 7.5-billion first phase of the project targeted for completion in 2024.

The event forms part of pre-anniversary celebrations of the Philippine Marine Corps, which will reach its 71st year on November 7. It also highlights the anticipated transfer of the Marines to its new home.

“Today, just three days from the Philippine Marines’ 71st anniversary, we are laying the foundation not just for the future home of the Corps, but for the Marines’ continued modernization despite the COVID-19 pandemic. BCDA is honored to support the men and women of the Corps despite these trying times so they may serve and protect our countrymen,” Batuhan said.

He added, “As part of its relocation and replication program, BCDA is giving up 100 hectares of its land here in Bataan Technology Park for the Philippine Marines Headquarters, which covers only about 12 hectares in Fort Bonifacio. The total replication cost for this development is Php 28 billion and we trust that this will go a long way in enhancing the operational effectiveness and responsiveness of the Marine Corps.”

With the transfer of the Marines to an upgraded and strategic location, income-generating opportunities will be opened up for the government in the soon-to-be vacated area in Fort Bonifacio. The Marines currently occupy 12.46 hectares in Bonifacio South Pointe.

Unlike its current headquarters in Metro Manila, where operations are hindered by traffic and congestion, the Bataan location was deemed ideal for the Marines as it would help expedite emergency response and ease deployment of troops.

“The Philippine Marine Corps is excited for this much-awaited groundbreaking ceremony and looks forward to building our new headquarters at the Bataan Technology Park. We see the strategic value of this area and confirm that it offers a conducive place especially that we are in the midst of strengthening our Archipelagic Coastal Defense strategy. We thank the BCDA, the local government, and the people of Bataan for accommodating us here,” Caculitan said.

Phase 1 of the replication project is composed of three site development and construction packages, which are now under various stages of procurement through competitive bidding.

The first package of the development mainly involves security and utility facilities, while package 2 consists of a detention facility, a retraining battalion facility, liaison office, billeting, and other operations and support structures for the Marines.

The last package includes the PMC headquarters, a communication tower, residential areas and other support facilities.

On August 5 this year, the Department of National Defense (DND) and BCDA signed a memorandum of agreement for the replication of the Philippine Navy’s existing facilities at Bonifacio South Pointe inside Fort Bonifacio, and the Navy Village also in Taguig City.

Pursuant to its mandate under Republic Act 7227 to raise funds for the AFP Modernization Program and to convert former US military bases into alternative productive uses, the BCDA has been working on the development of the 33.1-hectare Bonifacio South Pointe property inside Fort Bonifacio. SM Prime Holdings Inc. is BCDA’s joint venture partner for this project.

From May 1993 to December 2020, BCDA’s contribution to the AFP reached Php 49.19 billion. Of this amount, Php 38.07 billion is earmarked for the AFP Modernization Program and Php 11.12 billion for the replication of military facilities.