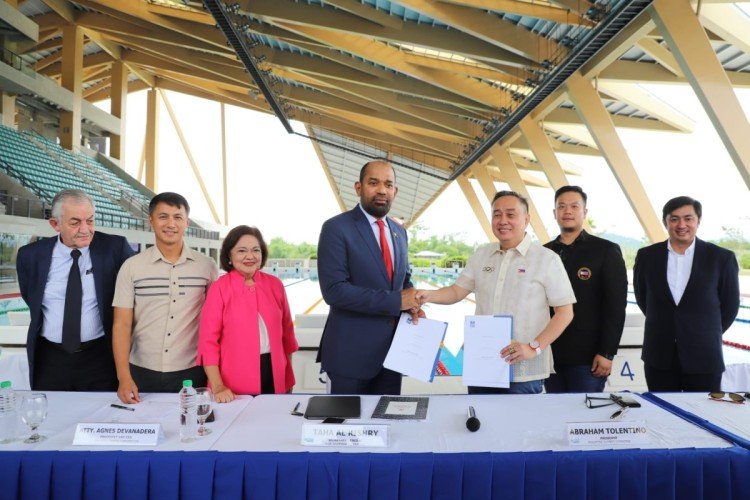 In recognition of its world-class facilities and pools, the New Clark City Aquatics Center in Tarlac has been chosen by the Asia Swimming Federation (AASF) as the host venue for the 11th Asian Age Group Swimming Championships to be held in November 2023.

The competition–which will include four aquatic disciplines, namely, swimming, diving, water polo and artistic swimming–is slated to be the first international competition in New Clark City since the hosting of the 30th Southeast Asian Games in 2019.

The Philippine Olympic Committee (POC) will be the organizer of the event, with the Bases Conversion and Development Authority (BCDA) serving as a partner for the venue.

“It was in December 2019 when we decided to host the Asian Age Group Swimming Championship here in New Clark City, after the success of the SEA Games. Today, we announce the one year countdown of the championship, which will happen in November 2023,” AASF Secretary General Taha S. Al Kishry said.

To formalize the event hosting in New Clark City, the AASF Secretary General and the POC President on Wednesday, November 23, signed a memorandum of agreement (MOA), as witnessed by BCDA Senior Vice President for Corporate Services Arrey A. Perez.

"This is truly an opportunity for us to show our facilities and homegrown talents. Thank you to AASF for choosing the Philippines to host this great event," Mr. Tolentino said.

Aside from the venue, the agreement also sets the requirements for the hosting of the Asian Age Group Championships, in accordance with AASF and Fédération Internationale de Natation (FINA) rules.

For BCDA President and Chief Executive Officer Aileen R. Zosa, the upcoming competition serves as another step towards achieving New Clark City’s vision of becoming a center of sports excellence in the country.

“We express our utmost gratitude to the AASF for its continued trust in the BCDA and for choosing New Clark City to host the region’s best swimmers for the Asian Age Group Swimming Championships next year. We are one with AASF’s vision of advancing the development of aquatic sports in the region, by ensuring a high-level competition that is compliant with international standards,” Ms. Zosa said.

Mr. Perez, for his part, said this momentous competition will further cement New Clark City’s position as a prime venue for sporting events.

“Our promise is this: we are with you in your vision of advancing the development of aquatic sports in the region, by ensuring a high-level competition that is of global standards,” Mr. Perez said.
AASF is the governing body of aquatic sports in Asia and is duly recognized by the Olympic Council of Asia and FINA. Its mission is to elevate the importance and level of aquatics in the continent by organizing championships, activities and events which encourages the participation of its 45 National Federation members.

The New Clark City Aquatics Center is the only FINA-approved swimming facility in the Philippines. With a total seating capacity of 2,000, it features a 10-lane competition pool, eight-lane training pool and a diving pool.

The competition pool, the training pool, and the diving well were designed and installed by Myrtha Pools, an official FINA partner and leading builder of made-to-measure competition pools. The New Clark City Aquatics Center is part of the National Government Administrative Center Phase 1 project.