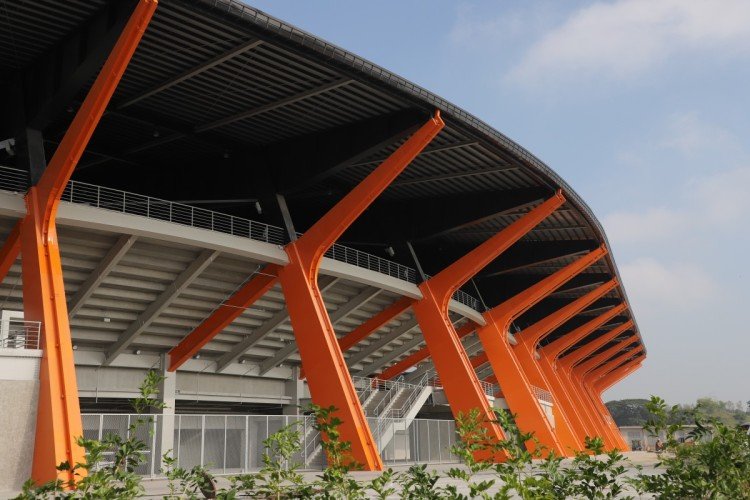 The Athletics Stadium in New Clark City, Tarlac has received the Highly Commended recognition from the World Architecture Festival (WAF) in the Completed Buildings - Sport Category, cementing its status as one of the world's best architectural structures in recent years.

Atty. Aristotle Batuhan, officer-in-charge of the Bases Conversion and Development Authority’s (BCDA) Office of the President and CEO, expressed elation over the award and congratulated its architectural consultant BUDJI+ROYAL Architecture+Design, development partner MTD Philippines Inc., and the hundreds of Filipino workers who worked tirelessly to construct the stadium.

“This recognition from internationally acclaimed jurors of the most prestigious architectural festival is affirmation that New Clark City’s Athletics Stadium is not only a state-of-the art sports facility, but a work of art. The modern sustainable design, natural surroundings and inspiration from Central Luzon’s heritage all came together in constructing a stadium that is truly unique, and truly Filipino. We at the BCDA congratulate the team behind the Athletics Stadium for successfully building a stadium that we Filipinos can proudly show off to the world,” Batuhan said.

He added, “This is a step closer towards our goal of making New Clark City as the country’s next top sports tourism destination. The Athletics Stadium also showcases what the government really wants to achieve in this new metropolis–to make a green, sustainable and smart city with world-class facilities.”

The World Architecture Festival is one of the world’s largest architectural events, highlighted by its awards competition dedicated to celebrating and sharing international excellence in architecture.

The New Clark City Athletics Stadium was among the nine Filipino projects shortlisted to compete in 11 categories of the prestigious festival. It was shortlisted earlier in the Completed Buildings - Sport Category and was in the running for the Engineering Prize.

BUDJI+ROYAL Architecture+Design presented the project to an international panel of judges online last October, and again in November as part of the judging process for the two categories.

“[We feel] fulfilled! Because we are able to bring Modern Filipino architecture + design out there in the global scene. A juror expressed his surprise that we Filipinos are doing something like this. With our creativity, we’ve sent the message that a developing country can be at par and host international events,” said Royal Pineda, principal architect and CEO of BUDJI+ROYAL.

“Congratulations to everyone in the team: BCDA, MTD Philippines, the public and private entities, and all consultants, professionals and workers who took pride in building a legacy for the coming generations. This brought out a new attitude of the Filipino. It planted the seed of betterment, optimism, commitment. This motivates us as a nation,” Pineda added.

Ken Rosewall Arena Redevelopment by Cox Architecture was named as the 2021 category winner for Completed Buildings - Sport. Ariake Gymnastics Centre, designed by Nikken Sekkei Ltd. joined the Athletics Stadium in receiving the Highly Commended nod in the same category. It also won the Engineering Prize as one of the six WAF 2021 Special Prize winners.

Meanwhile, another Filipino project, the Interweave Building by Buensalido Architects, received Highly Commended nods both in the Completed Buildings - School category and the Best Use of Color Prize.

With a 20,000-seating capacity, a nine-lane 400-meter track and field, and another four-lane warm-up track, New Clark City Athletics Stadium is the first-ever facility in the country to receive a Class 1 certification from the International Association of Athletics Federations (IAAF).

The stadium served as a venue for the 30th Southeast Asian Games in 2019 and was previously nominated as one of the top 10 best stadiums in the world at the annual Stadium of the Year Awards.

Its design celebrates Filipino resilience, taking inspiration from the “caldera” or crater of Mount Pinatubo and the contours of the Sierra Madre ranges, and the festive details of the parols (Christmas lanterns) of Pampanga.

MTD Philippines executed the stadium’s design within a period of 18 months.

Construction has started on the Php 35-million multi-purpose ferry port terminal in San Fernando, La Union, a transport facility aimed at cutting travel time to and from the cities of Alaminos and San Fernando, as well as Dagupan in Pangasinan.

Responding to the urgent call for aid in the wake of Typhoon Odette, the Bases Conversion and Development Authority (BCDA), in partnership with the Air Logistics Command (ALC) of the Philippine Air Force (PAF), recently donated relief packages to

As part of its relocation and replication program for the transfer of military structures from the Bonifacio South Pointe lot in Taguig City, the Bases Conversion and Development Authority (BCDA) is building a Php 283.4-million state-of-the-art