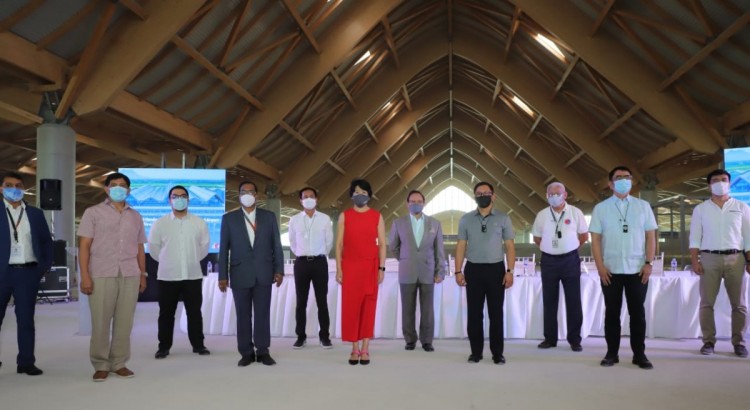 The Megawide-GMR Construction Joint Venture, Inc. (MGCJV) handed over the certificate for the completion of the Clark International Airport New Passenger Terminal Building’s Engineering Procurement and Construction (EPC) Works to the Department of Transportation (DOTr) and the Bases Conversion and Development Authority (BCDA) in ceremonies held at the airport site inside the Clark Freeport in Pampanga on Friday, January 22.

The event marks the official handover of the facility to the Philippine government. The DOTr and BCDA subsequently turned over the airport terminal to its operations and maintenance partner Luzon International Premier Airport Development (LIPAD) Corporation for final fit-out prior to opening and full operations within the year.

Newly elected chair of the House Special Committee on Bases Conversion Congressman Aurelio Gonzales, Jr. emphasized CRK’s role as a catalyst of progress. "We envisioned this to be Asia's next premiere gateway which will help foster economic growth. This is indeed a testament of the government's goal in making Clark the next premiere metropolis of Asia and putting our country one step closer to progress and prosperity," stated Rep. Gonzales.

Former President and current Presidential Adviser on Clark Flagship Programs and Projects Gloria Macapagal-Arroyo underscored the significance of the project and its contribution to the country’s economic growth. Clark Development Corporation (CDC) Vice Chairman of the Board of Directors Retired Lt.Gen. Benjamin Defensor read the remarks for former President Arroyo, “This airport is the flagship of how I envisioned Subic-Clark when I was a president: a competitive logistics and service center in the southeast Asian region."

The 110,000 square-meter Clark International Airport New Passenger Terminal Building is a joint project of DOTr and BCDA and is the first hybrid public-private partnership (PPP) project under the Build Build Build program of the Duterte administration. It is located within the Civil Aviation Complex of the Clark Freeport Zone. Its construction is the first phase of the airport's expansion, which will increase passenger capacity from the current four million to 12.2 million per year.

DOTr Secretary Arthur Tugade, represented by Civil Aviation Authority of the Philippines (CAAP) Director General Jim Sydiongco, said, “This important milestone will be forever etched in our history as a lasting legacy of the Duterte administration. Our gathering today marks another fulfillment of the promise of improved life for all."

The private consortium of Megawide-GMR, which won the contract for the Engineering, Procurement and Construction (EPC) of the terminal, started construction on the facility in 2018, and completed the project in October 2020.

Megawide Construction Corporation Chairman and CEO Edgar Saavedra, through Assistant Vice President & Head of Group Corporate Affairs Jason Torres, said in his message, "We are very proud to once again be involved in one of the most vital airport projects of this administration, and its undertaking to create an effective multi-airport strategy in Luzon."

For his part, BCDA Senior Vice President for Conversion and Development Joshua Bingcang said that the completion of the airport terminal reiterates BCDA’s commitment in making Clark the next premier economic hub in Asia.

He added, "The construction of the Clark International Airport New Terminal Building was done in record time. We are very excited for the facility to finally operate this year, as it will not only decongest the Ninoy Aquino International Airport in Metro Manila and enhance the passenger experience for the Filipino people but will also boost economic growth here in Clark and of the whole region.”

LIPAD Corporation, which was awarded the 25-year concession agreement for the operations and maintenance of the Clark International Airport, expects to complete its fit-out works and interior finishes and start operations by July 2021.

In her acceptance message, LIPAD CEO Bi Yong Chungunco expressed excitement over the operationalization of the new terminal saying, "we believe Clark International Airport is a major growth driver for the Central and North Luzon. Thus, getting the new terminal ready will contribute to our country's economic recovery.