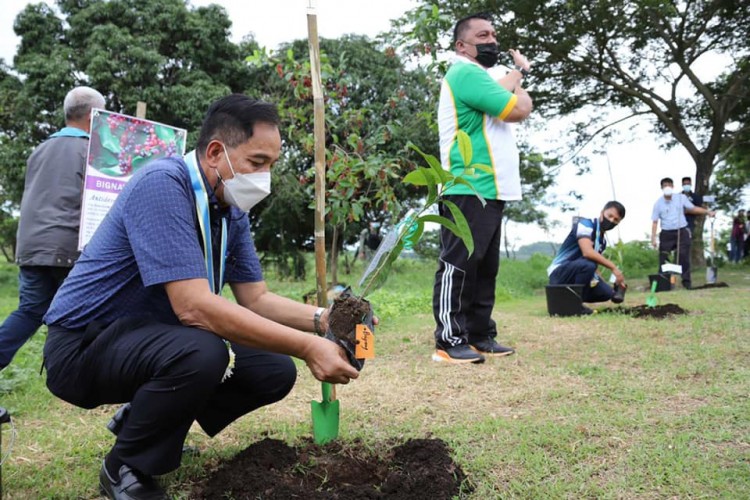 The event, which also marked the launch of the DA-led Seeds for the Future campaign, was highlighted by the planting of about 500 indigenous and endemic trees onsite to ensure that the biodiversity and sustainability principles of NCC are met.

Agriculture Secretary William Dar led the activity including the unveiling of the project billboard and the ceremonial distribution of seeds to Central Luzon farmers, who stand to benefit from the NSTP. Dar was joined at the launch by BCDA Senior Vice President Arrey Perez and Agriculture Undersecretary Cheryl Marie Natividad-Caballero.

“When I took over as the Secretary of Agriculture, we had to thoroughly examine how the Philippines can transform agriculture from a sleeping giant to something that will be considered as a big contributor to the economy. That’s when the vision for NSTP was born. BCDA is one important partner that is making us realize this agricultural industrialization,” said Sec. Dar.

Speaking on behalf of BCDA President and CEO Vince Dizon, Perez stressed that agriculture sustainability is high on New Clark City’s priority list to help the economy “bounce back better” in the time of crisis.

“Today, we plant the seeds for the future, so Filipinos may finally realize the vision of making the country agriculturally sustainable and resilient. The establishment of NSTP is important more than ever, with agriculture being a major driver for the Philippine economy’s recovery from the pandemic,” Perez said.

The NSTP would be the first to rise on the 50-hectare Agro-Industrial Business Corridor (ABC) at NCC. The seed technopark will serve as a home for a seed laboratory, incubation hubs, a machinery shed, soil and water chemistry laboratory, and other support facilities.

BCDA will then develop the second phase of NSTP, which would cover the remaining 43 hectares and would be dedicated to agribusiness developments, including downstream and upstream linkages in the agricultural value chains.

It was in December 2020 when DA and BCDA signed a memorandum of agreement for the New Clark City Agro-Industrial Business Corridor and NSTP, which are envisioned to lay the foundation for the future of Philippine agriculture.

The NSTP will be at the core of the Philippines’ modern crop industry, taking the country one step towards industrialization and modernization of the agriculture industry.

The Seeds for Future campaign, anchored on the concept of “creating an industry for every commodity,” kicks off the development of NSTP. This campaign aims to encourage strong partnerships among the public and private organizations and with the local communities that would lead to the production, promotion, and availability of quality seed stock both for farming and commercial plantation.

It also seeks to bring in multi-stakeholder partnerships through capacity-building, access to modern laboratory services, and connectivity in the seed value chain for local and export markets