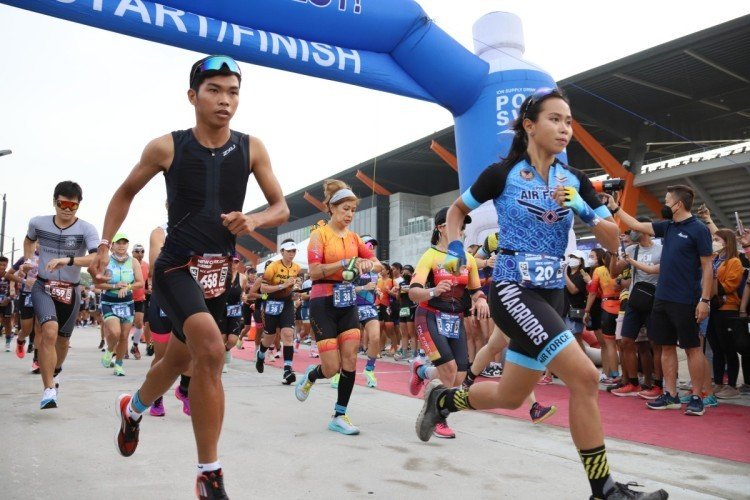 Jointly organized by the Bases Conversion and Development Authority (BCDA) and the GoClark Sports and Events, around 650 enthusiasts were welcomed and had participated in this multi-sports competition that tested their individual strength, endurance and grit.

The NCC Duathlon is the second major sports event held at the New Clark City this year, after its reopening last May from a series of lockdowns, stricter border regulations, and restrictions in mobility brought about by the two-year pandemic.

This event also marked as first for GoClark in NCC this year, following the successful New Clark City Triathlon it co-hosted with BCDA in October 2019.

“Ito ang kagandahan. We have the private sector that supports our advocacies particularly in promoting wellness and sports development of the country. ‘Yung mga katulad ni Jumbo with Go Clark, they hold a lot of events dito sa Clark – the Clark Zone and the New Clark City,” SVP Perez emphasized.

For his part, Atty. Roseller Rodriguez, the municipal mayor of Capas, Tarlac, extended his warm welcome to the race participants, and expressed pride and gratitude to the event organizers for choosing New Clark City as its sporting destination.

“We take pride in hosting another exciting athletic event for our race enthusiasts—New Clark City Duathlon. Hats off to the organizers for the hard work that goes into coordinating this meticulously detailed event. To the participants, we sincerely admire the focus and discipline,” said Mayor Rodriguez through his representative Maita Claire Bartolome.

Aside from the NCC Duathlon, two more sporting events are being scheduled by GoClark in the New Clark City within the year. The Clark Cycling Classic is set on August 27 and 28, featuring individual and team trial and gravel race. The New Clark City Triathlon, on the other hand, is expected to take place on September 24 and 25, marking the return of triathlon activities, and would feature adult and kids aquathlon.

Meanwhile, duathlon participants, professionals and amateurs alike, expressed satisfaction in the way the event was handled, as well as their delight in using the facilities of the New Clark City.

“The event is so awesome. It was my first race and it was so beautiful. Ang ganda ng pagka-organize,” said Andrew Lloyd Alomarde, a first-time duathlete under the NCC Short race.