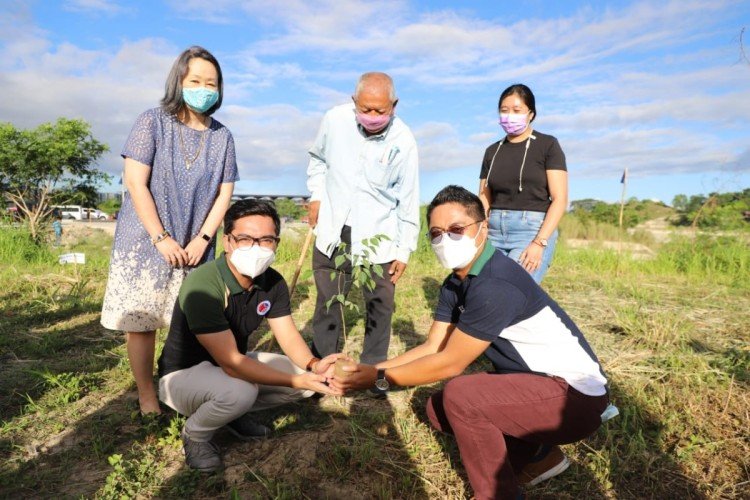 In line with its thrust to promote sustainable development in the country, the Bases Conversion and Development Authority (BCDA) recently launched its year-long reforestation and greening campaign through a tree planting activity in New Clark City, Tarlac.

A total of 500 seedlings were planted within New Clark City during the campaign kick-off last April 22, organized in partnership with private sector groups led by the Abacan River and Angeles Watershed Advocacy Council Inc. (ARAW-ACI).

This event is the first in a series of tree planting initiatives to be conducted by BCDA as part of the state organization’s 30th anniversary celebration this year. It was also held in observance of Earth Day 2022 themed “Invest in Our Planet.”

“New Clark City was built on the principles of sustainability, resiliency and inclusivity. While we continue the implementation of high-impact infrastructure projects to propel economic growth, we recognize our duty to give back to Mother Earth and to preserve the environment for our future generations,” said Engr. Mark P. Torres, vice president for the Engineering and Social Support Department of the BCDA.

“This initiative is just one of the steps taken by BCDA to achieve inclusivity through sustainability. Moving forward and further, we hope to be instrumental in investing in the planet alongside partners,” he added.

ARAW-ACI provided the seedlings for the tree planting activity, consisting of bamboo, narra, molave and kalantas. The choice of seedlings was based on the recommendations made by the Asian Development Bank (ADB) in its Biodiversity Assessment Study for New Clark City.

“I am extending our deepest gratitude to BCDA for making us a partner-advocate in launching the greening and reforestation campaign for sustainable communities. Our shared dream and goal is to provide enough resources for future generations–that is ensuring sustainability through our advocacies for water security, food security and climate change action,” ARAW-ACI President Renato S. Tayag Jr. said.

Cleo Kawawaki, head of Asian Development Bank’s Office of Public-Private Partnership, said, “Smart, resilient and green–this is the way of the future. BCDA has been a trailblazer in urban development and making this dream come true. I am so excited to be a part of this tree planting to make resilience and water preservation be a part of this great endeavor.”

In addition to sustainability goals, the tree planting drive also fulfills the commitment of BCDA and the Department of Transportation (DOTr) to the Department of Environment and Natural Resources (DENR) to replace trees that will be affected by the Subic-Clark Railway Project (SCRP).

SCRP is a 71-km freight railway connecting Subic Bay Freeport Zone and Clark Freeport Zone, linking the Port of Subic Bay and Clark International Airport and other economic hubs in the region, including New Clark City.

ARAW-ACI is a non-stock, non-profit organization registered with the Securities and Exchange Commission (SEC) and a long-time partner of the Angeles City LGU in the Adopt-A-Watershed advocacy program in Barangay Sapangbato, Angeles City.

The ADB, meanwhile, is one of the institutions consulted by BCDA in the planning and development of New Clark City. In 2019, the multilateral bank published its Biodiversity Assessment Study for New Clark City aimed to generate new scientific information that will enable the government to build New Clark City’s foundation on nature-based solutions.