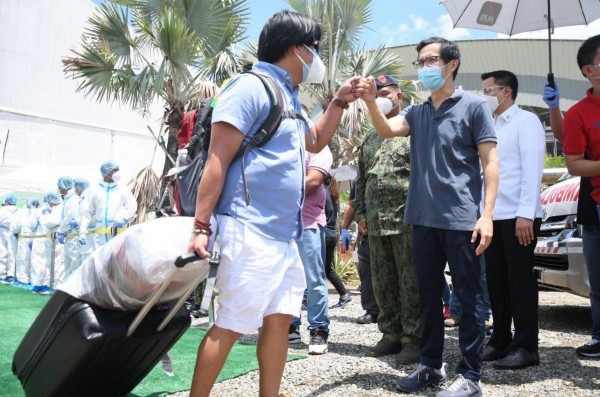 The We Heal As One Center-Philippine Arena sent home on Friday 78 recovered patients, mostly overseas Filipino workers, after testing negative from COVID-19.

In a ceremony led by National Action Plan Against COVID-19 Deputy Chief Implementer Vince Dizon, Maligaya Development Corporation Chief Operating Officer and Iglesia Ni Cristo Official Atty. Glicerio “Ka GP” Santos IV, and Bureau of Quarantine Deputy Director Dr. Roberto Salvador Jr., the OFWs were cheered on as they left the quarantine facility and met with their families who fetched them home. Others were transported via buses to their respective destinations.

Dr. Salvador emphasized that the patients were treated as “family” by the health workers in the facility.

Jhoneyfer Derasin, a seafarer from Brazil expressed thanks to the doctors who took care of the patients during their stay.

Of the recovered patients, 76 are returning OFWs and two are members of the Philippine Coast Guard (PCG).

The We Heal As One Center-Philippine Arena has a 300-bed capacity. It is one of the quarantine facilities speedily put up by the national government with the help of the private sector, as part of the Test, Trace, Treat strategy, to save more lives amid the pandemic.

Despite challenges posed by the COVID-19 pandemic, the Bases Conversion and Development Authority (BCDA) has retained its ISO 9001:2015 certification for meeting international standards on quality assurance and services.

The Bases Conversion and Development Authority (BCDA) is converting another building at the National Government Administrative Center into a quarantine facility, bringing Clark’s isolation capacity to 1,121 beds.

The Bases Conversion and Development Authority (BCDA) made a record-high contribution to the AFP in the first five years of the Duterte administration. BCDA contributed Php 17.8 billion from 2016 to 2021 to the AFP, higher than the Php 13 billion

The Bases Conversion and Development Authority (BCDA) is a step closer towards the completion of its over Php 3-billion plan to relocate and modernize the housing and support facilities of the Philippine Air Force (PAF).